But to what extent are the earnings differences across university courses down to the course itself, and to what extent are they due to differences in students doing the courses? In other words, do Russell Group and economics graduates earn more because they have better A levels and are from wealthier backgrounds, or does the subject you study and the university you go to have an effect over and above your background and prior attainment? These are questions answered for the first time using large scale administrative data in new research by a team led by the IFS and produced with funding from the Department for Education.

Prior attainment and socio-economic background do matter. Comparing graduates who attended the same university, took the same degree subject and who have similar background characteristics, every extra A-level at grade A raises your earnings by around 3%, while coming from the highest socio-economic background adds around 8% compared to coming from the lowest. But crucially, the subject you study at university and the higher education institution you attend also matter a lot. Estimates for the impact of all subjects, university and courses (subject-university combination) are available on the DfE website.

The rich dataset allows us to investigate earnings at the course (subject-institution) level for the first time. This allows us to compare, for example, studying maths at Imperial College with studying history at Newcastle. We document earnings and returns for more than 1200 courses offered in the UK, separately for men and women.

A number of factors that impact future earnings are determined before students start university:

Jack Britton, Senior Research Economist at IFS and an author of the report, said:

“Family background has an important impact on graduates’ future earnings, but subject and institution choice can be even more important. Even when comparing similar graduates, being from the highest socio-economic background adds around 8% compared to being from the lowest. However compared to the average degree, studying medicine or economics add 20% to graduates’ earnings, while compared to the average university, going to a Russell Group institution adds around 10%.”

Chris Belfield, Research Economist at IFS and an author of the report, said:

“Even after students know which subject they want to study, the choice of institution represents an important decision that can have significant consequences for future earnings. For example, business degrees offer their graduates high returns on average, but there is wide variation across institutions. For women, the top business courses offer returns of around 50% above the average degree, while the business courses with the lowest returns have returns below the average degree.”

You can find a complimentary (additional) report summary with charts and data on the IFS website: https://www.ifs.org.uk/publications/13036

The Department for Education (DfE) provided funding for this report, which was independently produced by the authors. Co-funding from the ESRC-funded Centre for the Microeconomic Analysis of Public Policy at IFS is also gratefully acknowledged. 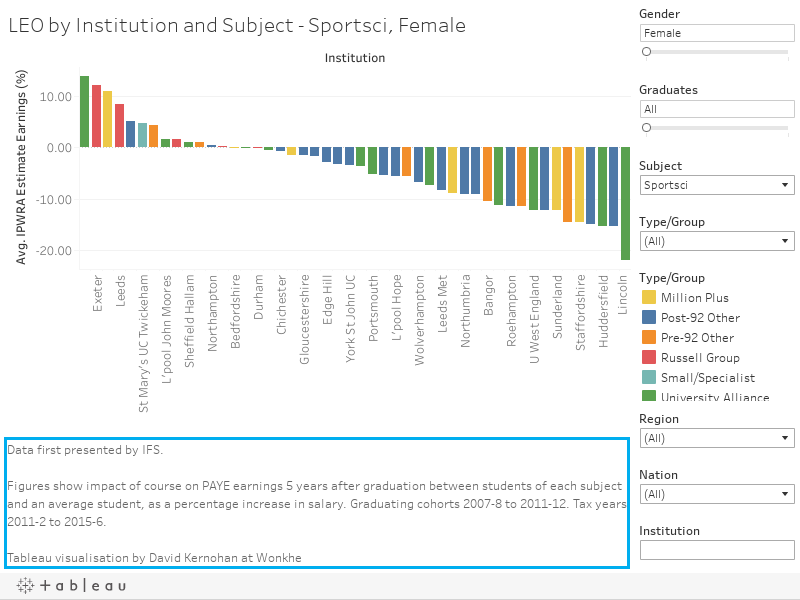